Dawn and Gloria were both away this month so Karen chaired the meeting with 18 members present.  5 members took advantage of the all-day quilting before the evening meeting.

Lori demonstrated and handed out the second step in the Mystery Quilt.  This step requires even smaller half
square triangle units than the first, but you only need half as many as the first step.

The UFO day on January 19 was a challenge for many with the winter driving conditions - three members turned out for the day.  It was suggested we look at the UFO days for next year and perhaps holding them in Dauphin at the Olde Fire Hall, at least during the winter months.
Sherry will send out invitations for the June 6th Windup to the other participating guilds, indicating doors will open at 5PM for shopping with supper at 6:30PM.  We will require an RSVP by May 1, 2013.

Lori has the 'split leaf' donation blocks.  She indicated that if anyone has extras that maybe they didn't get a chance to turn in, she would take them to put into the quilt.

Committee members for the Quilt Show are to have reports ready for March.

Our current donation quilt blocks were the black and white half square triangles.  Winnie Boyachek won half the blocks which amounted to 30 blocks.  The other 30 will be made up into a quilt for the guild to have on hand.

Karen demonstrated the next donation block - the Disappearing 4 patch (March and April) to be done in creams/browns/rust.

The meeting concluded with a lovely show and tell.
Posted by Dawn at 1:45 PM 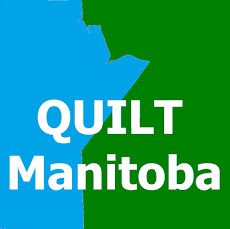